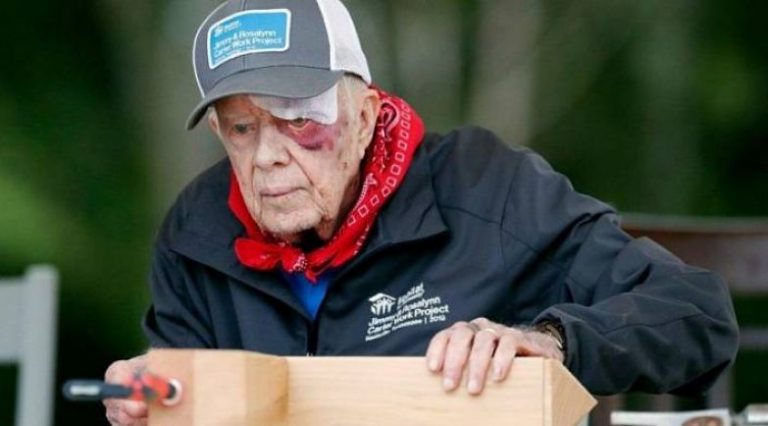 An amazing recipe for long life without fear!

We are all afraid of infirmity and disease in old age. Jimmy Carter, the 39th President of the United States, invented his recipe for long life without fear – at 95, he builds houses for the homeless and reads the Bible in Spanish at night.

In October 2019, 95-year-old Jimmy Carter fell at his home and severely injured his eye, requiring 14 stitches. Instead of sitting in a rocking chair, covered with a blanket, the ex-president, almost on the threshold of the hospital, took his wife Rosalyn by the hand (she is only four years younger than him) and they went to the construction site. “This is a priority for us now,” Carter explained to the dumbfounded doctors. On the construction site, he is no different from a few dozen other Habitat for Humanity volunteers. An international NGO helps people in difficult situations, primarily homeless citizens or very poor families, to repair or build simply affordable housing – with their own hands and with the support of volunteers and specialists.

In the US, Habitat for Humanity has been operating since 1976 in all 50 states, the District of Columbia, and Puerto Rico. During this time, 13.2 million people have been able to obtain safe and decent housing, and with it stability and independence.

Hammering a nail on the third try

“No matter who we are or where we come from, we all deserve a decent life. We have the power to take care of ourselves and build the future,” this motto of Habitat for Humanity is close to the life principles of the Carters, so since 1984, The Carter Center charity foundation has joined the construction work. Jimmy Carter is sure that the house gives them more than a safe place to sleep. It’s about dignity and self-respect. Carter emphasizes that in this project it was possible to destroy the cliche of “patronage” of charity and build partnerships on an equal footing, treating everyone equally.

Prospective homeowners selected for the Habitat for Humanity program must personally put in hundreds of hours building their home and be able to pay off their mortgage over time (at a significant discount). The happiest moment for the Carters is when yesterday’s builders receive the keys to their own house, the house in which they have invested so much work and now belongs to them. For the sake of this moment, the retired president, despite health difficulties, puts on a work overall, ties a red bandanna around his neck, and picks up a hammer. “Yes, age makes its own adjustments,” smiles Jimmy Carter. “Now I only manage to hammer in a nail on the third try.”

Babysitter who served time for murder 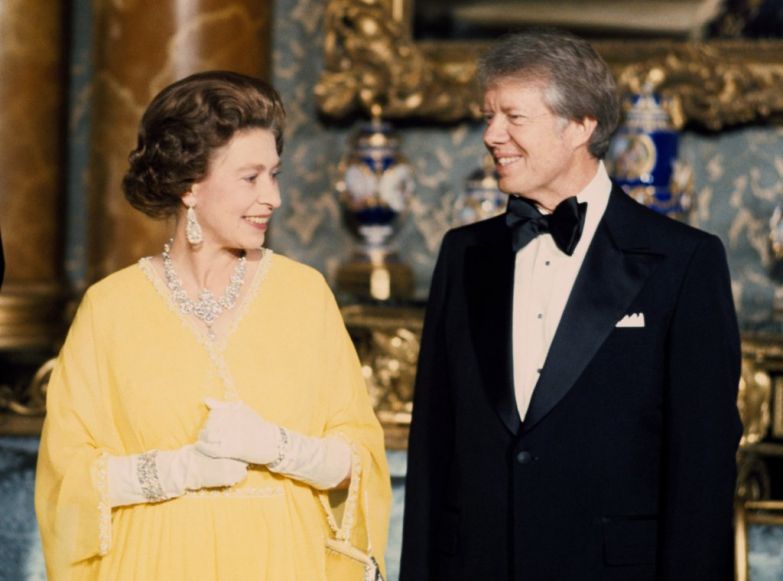 He served only one term in the White House – from January 20, 1977, to January 20, 1981 – and left, losing the battle for a second term to the self-confident, brash Ronald Reagan. Many in America do not like Carter for his softness – they say, he dropped the prestige of great power by refusing to take military action against the newfound enemy, Iran. Carter himself is most proud of the fact that he did not lead his country to war – he never fired a shot. “We didn’t drop bombs, we didn’t start a war, and we still managed to achieve our goals,” he says.

Carter also has a reputation for being an eccentric, although in reality he and his wife always followed their Christian beliefs. He sent his only daughter, Amy, the youngest of four children, to a public school that was historically considered “black” in the midst of the struggle of black Americans for their rights. In the early seventies, it was tantamount to exploding a bomb. The only president who did the same and also sent his child to public school was Theodore Roosevelt in 1902. While still the governor of his native state of Georgia, Carter hired a woman who had served time for murder as a babysitter for three-year-old Amy. Mary first came to work at the Governor’s Mansion the day she was released from prison and lived with the Carter family for over 40 years.

The temptation of power and money 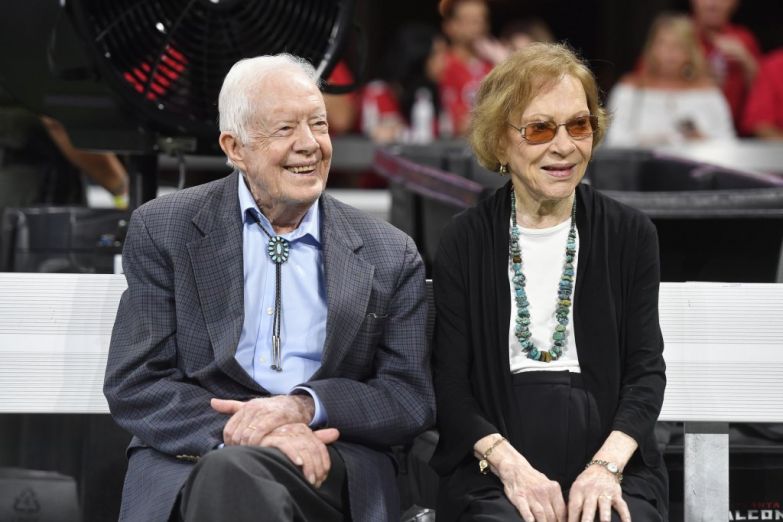 He was 56 years old when he became the ex-president. She and Rosalyn returned to their two-bedroom ranch home they built in 1961, and have lived in it ever since. Carter doesn’t use his position to make money by speaking – you’ll never find him in banks or large corporations lecturing, unlike other ex-presidents. The cost of the ranch is only $167,000. For reference: in 2017, former US President Barack Obama purchased a mansion in Washington for $8.1 million. Bill and Hillary Clinton’s tax returns have shown $109 million in income since leaving the White House, according to the Guardian. “I don’t judge or criticize anyone, I just never aspired to be rich,” says Carter. “We live the way we want.”

Jimmy and Rosalyn have been together for more than 70 years and are still inseparable: they look at each other with loving eyes and hold hands. The secret to the strength of a marriage is common hobbies, they try to discover new things together – learn foreign languages, climb mountains, fish. Over forty years ago, Jimmy and Rosalyn began reading the Bible to each other every night before bed. Recently switched to the Spanish Bible – “just to practice our Spanish.” She is inspired by his approach to life: until you try, you will not succeed. “That’s why he was never afraid of failure.” Carter believes that his health is the merit of Rosalyn, she is a strict nutritionist and cooks very well (by the way, they don’t have a personal chef either).

Where he took advantage of his presidency was peacemaking and philanthropy. In 1982, The Carter Center was founded in partnership with Emory University, with the goal of advocating for human rights and eradicating the terrible diseases of poverty that other charities do not reach their hands – efforts are mainly invested in the “big three”: HIV, AIDS, and malaria. When The Carter Center decided to eradicate the dangerous parasite, the guinea worm, there were 3.5 million infected worldwide. Last year, there were only 1,797 cases in all of Africa, mostly in South Sudan, and it looks like it will be the second eradication (after smallpox) of the disease. BF Carter also fights river blindness, trachoma, and elephantiasis. 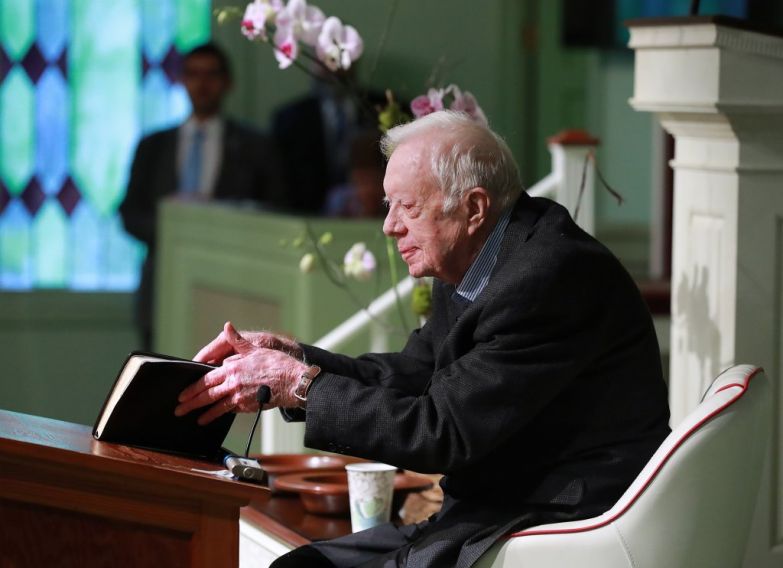 Carter’s post-presidential peace work in more than 80 countries – conflict resolution; promoting democracy and economic opportunity; disease prevention and social problem solving – was awarded the Nobel Peace Prize in 2002. This led even critics to call him the most successful ex-President of the White House in American history. “I have moral authority—as long as I don’t destroy it,” replies Jimmy Carter. He is certainly one of the spiritual leaders of the nation. For many years he has taught Sunday school at a Baptist church in his hometown of Plains. Parishioners are asked to reserve seats in advance, as there are many who want to listen.

A few years ago, Jimmy was diagnosed with melanoma, which had spread to his brain and liver. He was 90 years old and he decided that he had a couple of weeks left to live, no more. “Of course, I prayed. I didn’t ask God to let me live, I asked him to give me the right attitude towards death. And I felt an amazing calmness. From that moment I finally believed in life after death. But Carter recovered — and took it as a sign that God was asking him to return the good — to help others live better lives. “This is the little we can do, to repay kindness with kindness. That’s why we’re here building houses.”

What kind of person do I want to be

Over the course of 35 years, Jimmy and Rosalynne Carter have helped renovate over 4,300 low-income homes in 14 countries and have attracted thousands of volunteers and even celebrities to the Carter Work Project. Help is important now more than ever. According to the National Homelessness and Poverty Law Center, between 2.5 million and 3.5 million Americans sleep in shelters, bunkhouses, and other places that are not meant to be lived in. And the numbers are only growing. The unemployed, who have lost the ability to pay for housing, single mothers, people with disabilities, and the mentally ill – there are many reasons why a person ends up on the street. And no words convey the horror of homelessness – it is leg ulcers, insults, and contempt, daily violence that breaks and destroys humanity.

When Carter returned to the construction site with an eye patch, he was greeted by a crowd of joyful fellow volunteers, and the country famous singer hugged the president and joked: “Listen, Jimmy, I see you are still having fun in bars!”

Before construction began, Carter said the morning prayer. He spoke of Jesus and the success we all now crave, reminding the congregation that Jesus was poor and died young, abandoned by his closest friends. “But Jesus lived a perfect life because he followed the will of God,” Carter said, adding that every person “can achieve complete success in the eyes of God.” If your life is not filled with peace, joy, and thanksgiving, says the longest-lived president, it’s your fault. God gives us life and freedom and each of us can decide what kind of person we want to be?