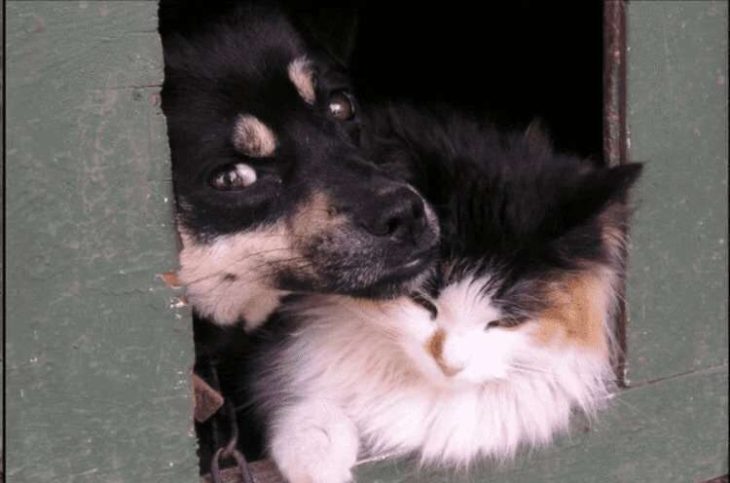 Many people are so irresponsible and heartless that it simply does not fit in my head. For example, often in the summer season, many people get animals for themselves, with which everyone fumbles and plays. And these animals live the whole summer in the country, and then people leave for the city. They abandon animals, as a result of which most of them die of hunger or frost. Such a story took place in a city in the Ivanovo region.

These cats and dogs had owners who simply left them, while the dog remained chained. This dog’s name is Baks, and somehow he still managed to break the chain.

After that, he still ran with her around his neck. A cat named Busya also stayed with the dog. She managed to catch mice, which she carried with her friend. After that, the cat and dog also learned to catch rats from birds. That is how they managed to survive. And when it was frosty in winter and it was very cold, the animals warmed each other. In February, one of their summer residents came here, who wanted to check his house. And then he met the animals.

He was shocked by what he saw and decided to immediately take his friends to his home. After that, he even managed to find those people who had the conscience to abandon the animals. All the inhabitants of the dacha village were deeply struck by such behavior. The former owners even had to go. As for the Baks and Busya, they began to live with their new owner. And today they are all right, they have a house and food.