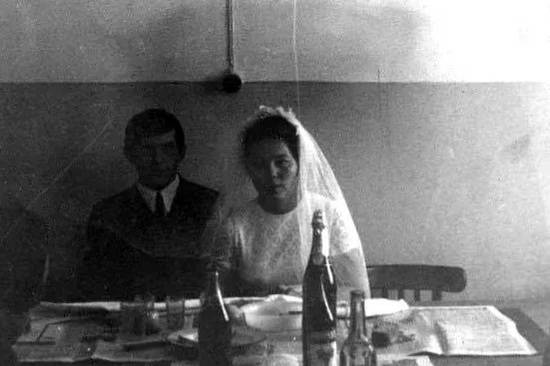 It was fun at first. Although there is nothing joyful about it.A simple wedding photo of poor quality.

Surprised by the “holiday” table. Quotation marks, I think, are appropriate. Because, seeing such a table, you think about the holiday the least.

Pieces of black bread are laid out on newspapers (!) and there are several bottles of alcohol and piles.

Moreover, the table takes up almost all the space in the photo. And only at the very wall, you can see the figurines of the bride and groom.

The bride is in a white dress and veil, everything is as it should be. Groom in a suit and white shirt. But… I was looking for information related to this photo. Unfortunately, I didn’t find anything worthwhile. A certain person threw an idea that the groom is not real! And painted on the wall. How do you like this idea? Indeed, the figure of the groom is in shadow and seems absolutely flat. It even got a little creepy.

In the discussion of this photo, someone thought that it was a memorial wedding. The groom, they say, did not live up to the wedding (goosebumps) and on the day of the appointed wedding, they arranged such an event. Personally, I don’t like this version. I believe that due to the quality of the film, such a strange effect arose.

I would like to know about the year and the place of the shooting. Well, the reason for such a strange treat.

If you have any versions, write in the comments.

There are versions that this is the post-war period. But, judging by the dress of the bride, I assume the end of the 50s – the beginning of the 60s.

Perhaps it happened somewhere in the Tselina. I do not think that there were particularly luxurious conditions.

A bottle of champagne on the table inspires some optimism. And it proves that in front of us in the photo is still just a wedding.

They are also different.