Hello! A week ago we heard strange sounds in the forest. They were issued from a tree in which there was some kind of hole. We couldn’t see anything inside, so we stuck our smartphones in there. There were two chicks there. By the red caps on the head, we determined that these were woodpecker chicks. But their mother was not with them. One of them squeaked all the time, and the second just watched.

After 2 days we returned to visit these friends. They were no longer alone – next to them was a whole bunch of poop. Strange, usually the parents clean the nest. This alarmed us. 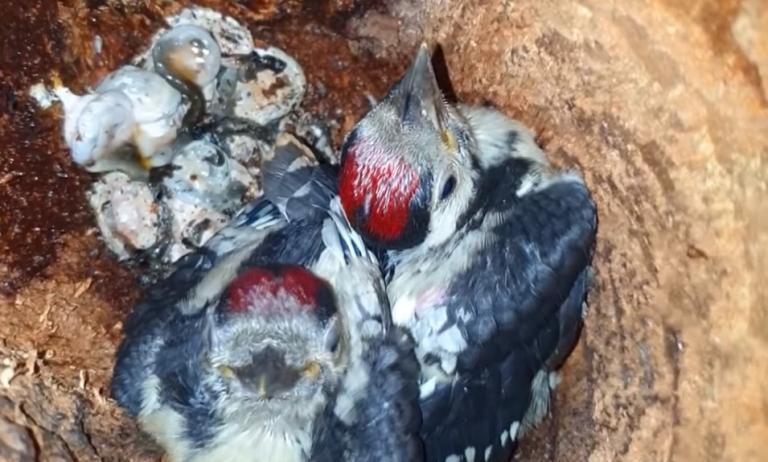 Over the weekend, we went to them again to check if everything was in order. They continued to sit alone in a pile of poop. But then moisture began to appear in the hollow, which mixed with feces. It was clear they didn’t like it.

We came for 5 days and never saw their mother. On the last day, we saw that their abdomen and legs were immersed in excrement, in which a lot of worms had developed. This is a terrible sight! We were afraid that these strange worms would harm the chicks or start eating them alive. 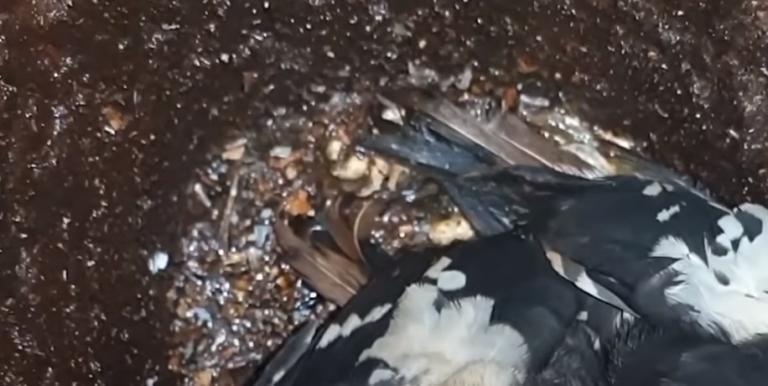 After weighing all the risks, it was decided to save the chicks. We came the next morning to pick them up from this boiler. The entrance was too narrow – you couldn’t get your hand through. Taking a garden shovel, we began to chip away pieces of rotten wood to widen the passage. After 10 minutes, the hole was large enough for a hand to fit through. And we started to get the chicks. 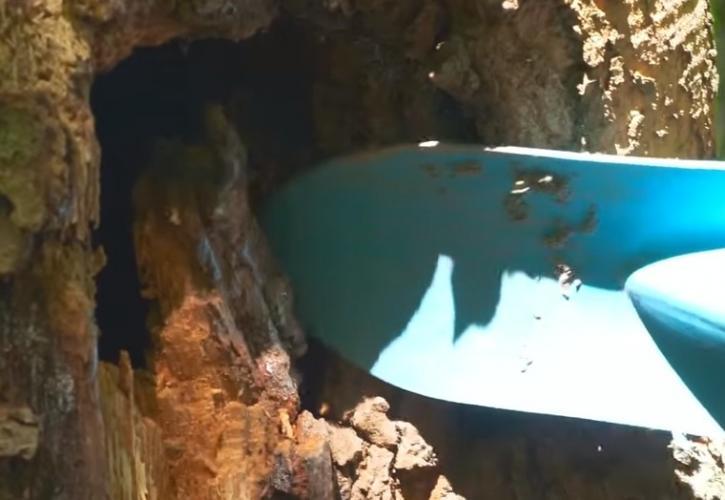 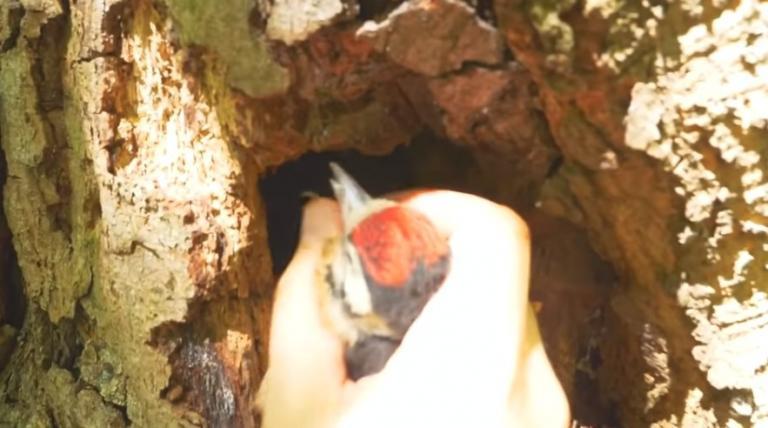 Their legs and bodies were covered in a stinking gruel with worms. If they can fly, then a good option would be to let them go right away. But they couldn’t. Either there were too few forces, or they had not yet grown and strengthened enough. I had to take them home. They were surprised and frightened because they had never seen anything other than their nest.

At home, we dried them thoroughly and put them in a box, where it was warm and dry. But now the question of nutrition arose, and we moved forward in search of food. What to feed them? Maybe they eat cone seeds, acorns, or mushrooms? But when we saw a caterpillar on a tree branch, we realized that this is what we need. And we started collecting different types of caterpillars. Not the most pleasant occupation, of course. But what can you do? The chicks want to eat. 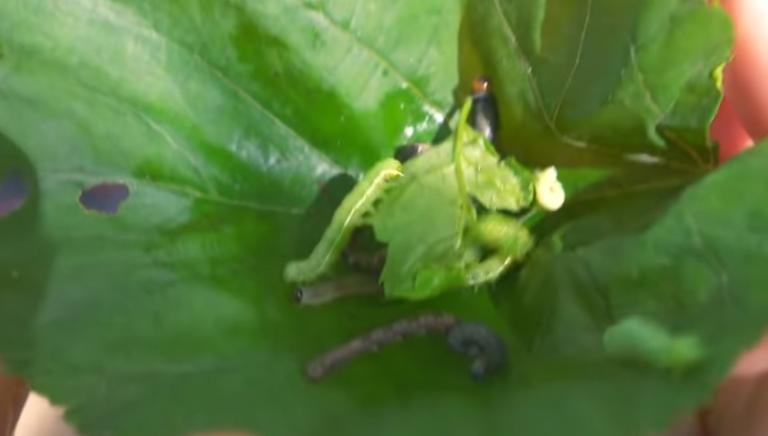 After 2 hours we returned home with a good catch. Caterpillars are very nutritious and probably contain the necessary elements for the development of chicks. Cooke also wanted to play with the caterpillar and even taste it.

So, putting on gloves, because woodpeckers have very sharp claws, we tried to feed them. At first, they didn’t want to eat. Even when we put food in their beak, they did not have a swallowing reflex. And we honestly didn’t know what to do. But then we took some water into the pipette, put it in the beak, and it worked. The chicks, swallowing water, swallowed the caterpillar along with it. The next day they did it without water. And after 2 days they themselves pounced on the caterpillar and ate it. 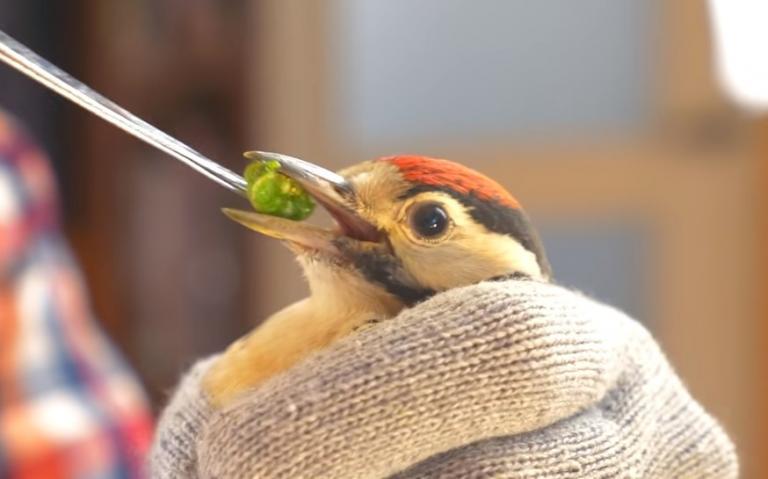 One day they started banging their beaks on the box. Probably, the chicks are already ready to fly to freedom. By letting them in the room, they showed that they were able to fly. And the next morning we returned to the same place to release the chicks. On the way, we picked up the caterpillars and fed them one more time, just in case. 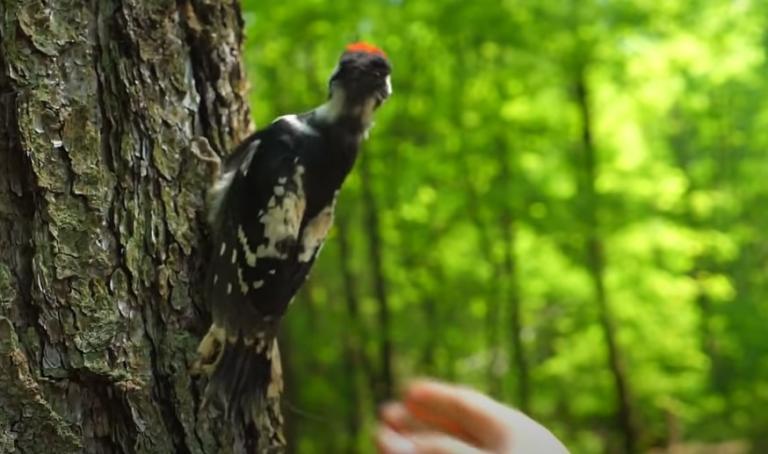 So, we put the first chick on the bark of a tree. He, without thinking twice, immediately flew confidently. Excellent! This one is ready for independent living. It’s the second’s turn. He was less sure of himself. He did not fly away, looked at us, and climbed up the tree. Then, having crossed to the opposite side of the tree, he fluttered and flew away after his brother. Apparently, they were very happy and began to explore the surrounding trees.After watching them for a while, we returned home. We are very happy that everything worked out. This is the happy ending to the chick rescue story.