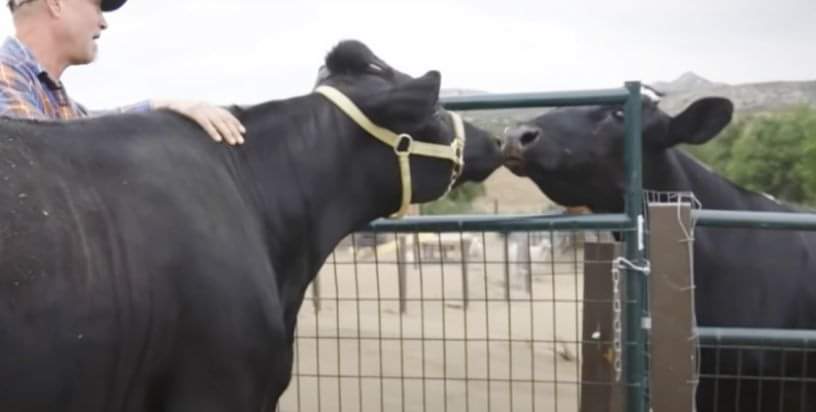 Have you ever heard that cows can create close friendships and deep relationships with one another?

They start to feel apprehensive even when their friends or loved ones are not around.

They feel at ease when their loved ones are around them. This holds true for their relationships with other cows that they are familiar with because of their same ancestry.

This story’s main focus is the reunification and rediscovery of two cows named Hope and Love, whose lives were momentarily separated as a result of a number of circumstances.

Because they had lived together for more than eight years, these two had a very unique bond. Hope, one of the cows, was born blind, so Love had to play the part of his friend’s eyes and lead him around.

That was how it all began. A family bought Hope with the intention of breeding him to satisfy their demands for dairy products.

However, when his owners subsequently discovered that their cow was blind, they chose to purchase a new cow, named Love, which was precisely what the cow required. He wanted a trustworthy buddy who would stand with him. The two greatest friends had to bid farewell to one other when one firm later volunteered to care for the blind cow by placing him with them.

Of course, the blind cow found it difficult and stressful.

The other farm animals stepped in to save him at that point and greatly assisted in making him comfortable. Hope was able to start managing his stress, which was a huge assistance. The day the two cows were finally allowed to rejoin had been eight hard months since the day they had been split up.

It was such a heartfelt scene. They began licking each other because they were so joyful and delighted. How adorable!