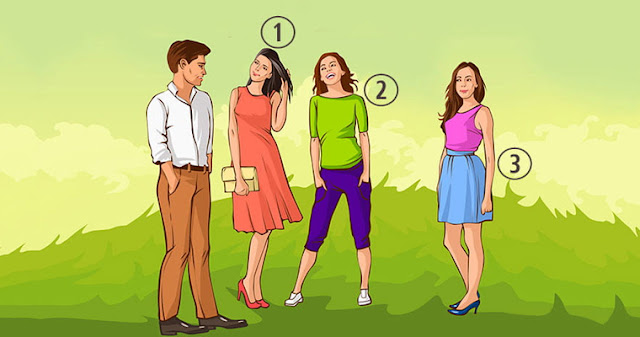 Why do women rarely take the first step in love?  Well, that’s because they’re not always sure that their feelings are mutual.  In this sense, if you pay more attention to body language, it will clear up a lot!

Today we invite you to test your ability to read gestures in order to solve an interesting riddle!

Which woman does the man like? Here is a picture of three girls and a young man. Your task is to answer which of them he likes the most. Look closely, the answer is in the details!

As Allan Pease shows in his book Body Language, there are many signs that reveal a man’s hidden attraction to a woman.

And while some of these gestures, such as dilated pupils, hands on the waist, etc., are easy to spot when communicating face-to-face, how can you trace this interest in the company of several girls?

This is a great question!

Turns out it’s actually quite possible! Look at the image again and pay attention to where the toes of his shoes are pointing! According to Allan Pease, this body part of a man usually indicates the woman who interests him most at that moment.  It turns out that when a man likes a woman, he unconsciously turns his body in her direction, or puts his foot forward in the direction of the desired woman.

Now you will always know which man you attract when you are in the company!