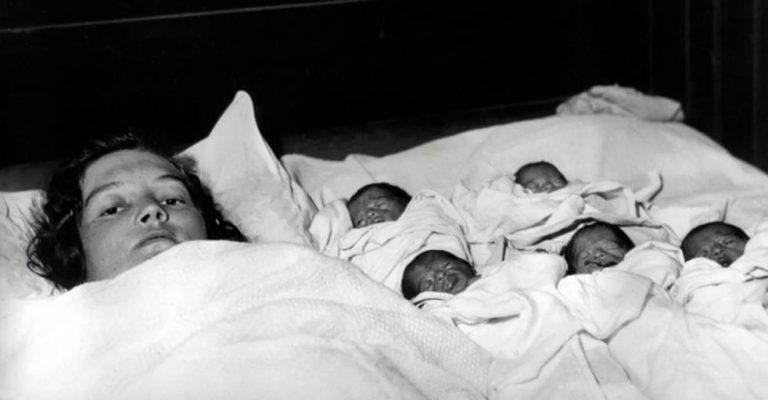 Parents did not expect the birth of the Dion twins. The farmer couple was already barely making ends meet, and the appearance of five hungry mouths at the same time could turn into a collapse for the family. Until parents showed that girls can make good money …

With the development of medical treatment of infertility in the middle of the 20th century, twins and triplets began to be born more and more often. That is, such children still remained a rarity, it’s just that their appearance no longer caused a storm of excitement.

But when in 1934 five seven-month-old twins were born at the same time in the family of a poor farmer Oliva-Edouard, this was a real shock for the family. It was in a small village in northern Ontario. The birth of Dion’s quintuplets was a miracle for onlookers and a horror for the family.

The beginning of a scary story.

The wife of the head of the family, Elzare Dion, guessed that she was carrying twins, but she could not even think that there were five children in her womb at once – the woman was not even sure that this was physically possible.

The Dion sisters were born at home, like most children in those days. There was no running water or electricity in the farmhouse, and Elzare was assisted only by two midwives and Dr. Allan Roy Dafoe. The doctor was sure that none of the twins would survive, and what was his surprise when the crumbs clung to life and refused to let it go. The total weight of the babies was only about 3 kg, but each of the Dion twins was alive. The Diones was poor and hardly able to raise one child in abundance. What can we say about five at once!

After the birth, the babies were placed in a wicker basket borrowed from neighbors by their parents, covered with heated blankets, and placed next to the open oven door to keep the sisters warm. The doctor took the twins out of the basket one by one and massaged them with olive oil. It soon became clear that the girls would survive. The mother did not have milk, so every two hours the babies were given a mixture of water, corn syrup, cow’s milk, and a couple of drops of rum.

News of the miraculous birth of five identical twins at once quickly spread throughout North America – people from all over Canada offered help, sent clothes and even gave advice. For example, in one of the letters, the author insisted that the Dion sisters should be given small doses of wheat whiskey to avoid diarrhea. Dion twins in a basket turned into a kind of circus attraction. Needless to say, with the birth of five twins, Oliva-Edouard was ruined – too many children immediately fell on his head. And then the man decided to exhibit the Dion twins at a fair in Chicago to show a miracle to people. It sounds crazy, but in those days, showing the so-called “incubator children” was not so uncommon. The girls were only a few months old at the time.

Soon the authorities intervened – they ruled that the Diones were not suitable for raising their twin daughters. It is curious that no claims were made to the upbringing of the remaining children. And all five Dion sisters were placed under Dr. Dafe’s care.

The doctor had his own interest in taking over the little ones. He placed them in the so-called Dafoe Hospital and Nursery, which was built specifically for the maintenance of the Dion twins.

Dion girls spent all their early childhood in the house of the guardian, where they obeyed the prison routine. The girls lived with the guardian for nine years before returning to their parents again.

The building was equipped with a playground where visitors could watch the girls – a kind of “human zoo” turned out. There were nine rooms in the room, three nurses looked after the girls, and three policemen guarded the Dion sisters. All the time the housekeeper and two maids lived with the girls. The Dion twins’ schedule was set to the minute. They were constantly examined, studied, and recorded every step. The girls could hear the tourists but couldn’t see them because the visitors were looking at the girls through a one-way screen. So the Dion sisters found themselves in a kind of imprisonment, from which it was impossible to get out. Every morning the twins dressed together in the large bathroom, then they drank orange juice and fish oil, then the girls’ hair was curled. The Dion twins prayed, and ate breakfast (exactly 30 minutes were allotted for food consumption), by nine o’clock they were taken to Dr. Dafe, who studied them. Before dinner, they took a bath and put on pajamas. Dinner was served every day at six o’clock sharp. Exactly at six o’clock for nine years. At the same time, each girl had her own color and icon, and all her things were marked with this color and icon. At this time, life outside was in full swing. Every day, the house where the Dion twins lived was visited by 6,000 people. The enterprising father of the girls, Oliva Dion, opened a souvenir shop opposite the house where his daughters lived and named it Quintland (from the Latin Quint – five). In the shop, Oliva sold photographs, spoons, cups, and sweets depicting the famous twins. And also stones from his farm – he assured buyers that they had miraculous powers. Even the midwives who were lucky enough to help the girls to be born, and got souvenir shops. The faces of the Dion twins appeared on advertising posters, dolls that looked like girls were sold in toy stores, like two drops of water. But no matter what happened, no matter how busy life was outside the Hospital, the girls had dinner at six in the evening, put on pajamas, and went to bed after prayer. Every day.

When the Dion twins were 9 years old, their parents managed to regain custody of the popular children. By that time, Oliva had built a new large house with 20 rooms, there was electricity and hot water. It seemed that the reunion of the Dion sisters with their parents was a blessing. But things turned out differently…Of course, after so many years in isolation, the move was a shock for the Dion sisters, because their old world collapsed, and they did not know the new one. However, Oliva insisted that the girls continue to “develop the brand.” The Dion sisters later recalled that their parents often punished them more severely than their brothers and sisters, often reprimanded them for being a burden to children. Later, already in 1995, the three surviving sisters said that their father had raped them when they were teenagers. The Dion twins themselves did not even realize that all of the sudden well-being of the family, literally everything that their parents had – a luxurious car, a huge house, and expensive clothes – the Dions received thanks to their daughters and their popularity.

One life for five As soon as the girls turned 18, they left the family and broke off any relationship with their parents and other relatives. The lives of all the Dion twins have developed in different ways. Emily became a nun but died at the age of 20. She suffered from epileptic seizures, and when she was left alone in the cell while the sisters went to mass, she suffocated, unable to raise her face from the pillow. The adult life of the Dion sisters was tragic. Many years of exploitation by adults have borne fruit …

Marie, the youngest of the Dion sisters, died at the age of 36 under mysterious circumstances. Although the girl planned to follow in her sister’s footsteps and also become a nun, due to poor health and homesickness, Marie returned to secular life. She married, she and her husband had two children who were placed in an orphanage after the couple broke up, from which the girl fell into depression. Once the sisters became worried that they had not heard from her for several days and called a doctor, thinking that the young woman was ill. When the doctor entered the apartment, he found that Marie had passed away – she had been dead for several days. Her ex-husband said that the girl died of a brain hemorrhage.

Annette and Cecile, especially Dion’s close twins, also tried to build a family relationship but failed. They loved each other very much and later began to live together. Cecile also had twins, but soon one of them died, and she herself was widowed.

Yvonne, who was the first of the Dion twins, could not stand socialization and lived her whole life in solitude. The girl did not try to build a family and make friends.

As adults, the Dion sisters sued and received compensation from the state in the amount of $ 4 million. “It’s too late and too little for our ruined lives,” they commented on what was happening.

But even the money received from the state did not bring happiness to the twins. Son Cecile Bertrand invested most of the amount in his own investments, but got burned, took more money, and soon simply disappeared from the horizon, leaving his mother in poverty. Now she lives in a boarding house.

Today, two of the five twins, Annette and Cecile, are alive.