When the doctors saw the condition of the animal, they immediately began to do everything possible to resuscitate him.

One frosty winter day, Fluffy’s pet cat decided to go for a walk while his owners were away. But, unfortunately, he did not manage to get back into the house through the door installed especially for him. Meanwhile, it was getting colder outside.

Returning home, the owners of the pet found him in the yard in a terrible state: the poor fellow was lying in the snow and froze so much that he was close to death. The cat’s fur was completely covered with dense clouds of snow and ice. The animal’s heart was beating, but its body was practically numb from the cold.

According to the veterinarian to whom the cat was brought, his owners have always been responsible and caring. When the doctors saw the condition of the animal, they immediately began to do everything possible to resuscitate him. A rush began, and everyone helped as best they could in the hope of saving the pet. 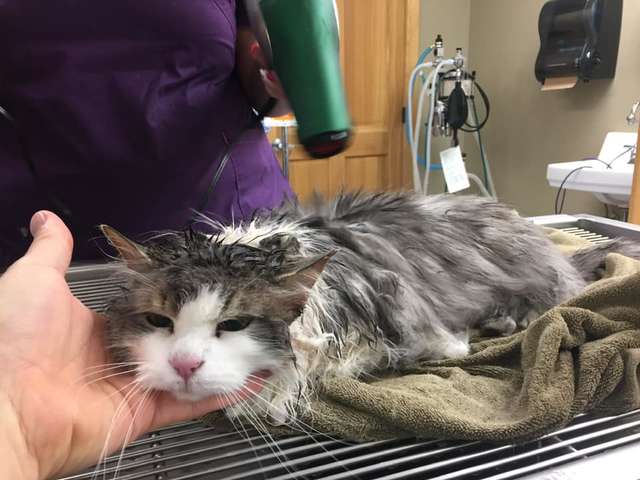 The veterinarians melted the snowballs with warm water and then began to dry the cat’s fur with hair dryers and warm towels. An hour later, Fluffy finally began to come to his senses and gradually move.

The owners did not understand why their pet could not get into the house through the door on its own. Perhaps he was attacked by a dog. This was evidenced by marks on the cat’s body, similar to wounds from dog teeth. Doctors said the damage was not serious and the cat was in good health.

Veterinarians and a nurse examined and treated the cat for several hours, and after that, the owners closely monitored his condition throughout the night. The next morning, Fluffy was able to move and walk freely. The owners were very worried about their pet and decided to continue to limit him to walks.

Now the cat was allowed into the yard only in warm weather. By the way, Fluffy was originally a stray cat and lived in this area before his family moved here. At first, caring people fed him and then decided to take him home to provide him with better living conditions.