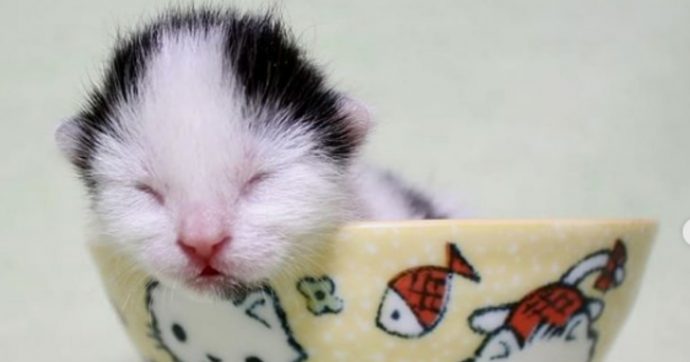 The poor cat was under severe stress

A kitten named Melody was only 10 months old when she ended up at a shelter in Portland, Oregon. The baby was pregnant, so she needed human help.

The animal was under severe stress, and something urgently needed to be done about it!

Then a guardian named Sheila was found for the pregnant baby. She says that she sincerely hoped that the animal would be able to relax at her place, but this did not happen. A couple of days later, the baby began to give birth …

She gave birth to her first kitten in her litter but did not care for him at all. The second baby was born on the floor right in the birth sack.

When people discovered the kittens were born (and this happened quite quickly), the baby, born in a bag, had already stopped breathing …

Sheila’s daughter began to warm the surviving pet. The girl had to do everything herself because the cat did not take care of the baby.

Six hours later two more kittens were born! Sheila and her daughter removed the birth bags from the babies on their own. And a couple of hours later, the last kitten was born …

The maternal instinct of the cat Melody never woke up. Sheila’s daughter had to temporarily be their parent. The girl fed the kittens every two hours while her mother was at work. She was ready to do anything to save these kids.

The crumbs weighed very little – about 70 grams, which is about 20 grams less than the weight of an ordinary newborn kitten.

Unfortunately, another baby could not be saved …

And the three surviving kittens clung to life with their tiny paws!

But every day the kids got stronger and gained weight – the efforts of daughter Sheila were not in vain. The kittens were fed and warmed.

Sheila and her daughter are sure that Melody did not care for the kittens only because fear lives in her soul. She was in the same room with the children but refused to feed them.

No matter what, the kitten willingly ate everything that Sheila brought her. True, she ate only when the woman left the room.

Guardians of Melody do not force the cat to take care of the kittens, allowing her to come to her senses and get used to human society. Mom and daughter are trying to prove to the timid cat that nothing bad can be expected from them.

When the kittens were two weeks old, they began to distinguish smells and hiss funny.

Look how cute they have become:

For about three weeks, Sheila’s daughter took care of the kittens around the clock, getting up at night to feed them.

It may take about six weeks for the kittens to become independent and gain weight well, and then they will begin to look for caring owners.