A small swan chick was found abandoned in a thicket on a river bank in Cambridgeshire (UK) in May. A local resident discovered it and the swan then had two wounds on its neck. Alone, and even more so, a wounded chick would not have survived.

When Rob Adamson, who often swims in these places on his boat, found out about the foundling, he decided to take the elk to him and feed him.

He named the chick Sidney and began to give him various foods that swans eat (aquatic plants, insects, worms, small fish), but also gave the usual green peas and Sidney was very fond of this dish. 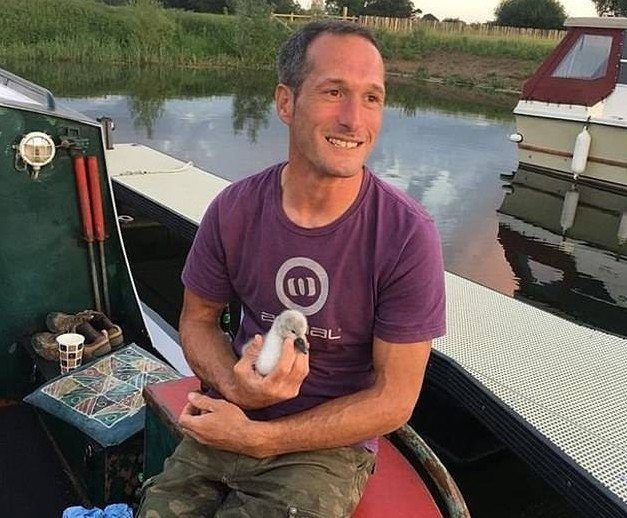 In July, when the chick had grown a little, the man decided to transfer the young swan to the RSPCA animal welfare service. However, three months later, the RSPCA was forced to return the swan to Rob, as the swan in their shelter was very bored and they were afraid that he would die.

During the time spent with Rob, the swan became very attached to him. Rob carried it everywhere with him in his arms, even when he went to the store, and even more so when he sailed along the river in his boat.

Now, when Rob is out on the boat, young Sidney the swan swims proudly by his side. A close bond arose between the bird and man, as between a parent and his child.

Rob had a small Chihuahua at home, and the swan made friends with the dog as well. 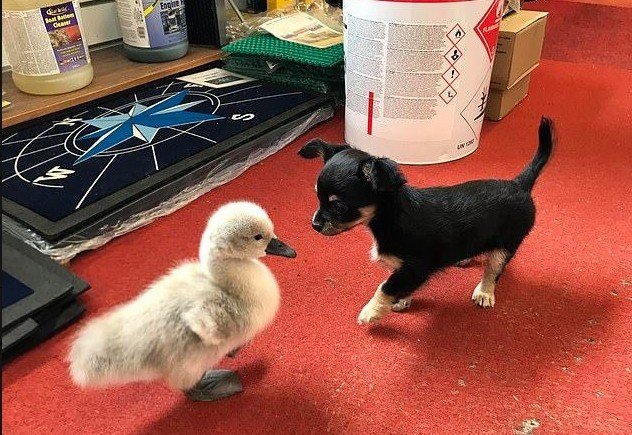 “I put a small box next to my bed for Sidney to sleep in, but he almost never sat in it but kept trying to get on my bed and lie next to me,” says Rob.

When Rob took the swan to the East Winch RSPCA Waterfowl Center in Norfolk, he thought he would never see Sidney again and that the swan would be better off there, as there were many other swans and he would be among his own.

But later, Rob received a call from there, where he was informed that Sydney was very homesick and that it would be better for him to return to Rob.

So Rob and his pet met again, three months later, and when the swan saw Rob and heard his special whistle, he immediately recognized him and swam towards him.

Rob was very happy and said that in fact he also missed Sydney very much.

Now Sidney lives on the same river Great Ouse near the city of St. Ives, where he was found in the spring and Rob looks after him. It remains to wish them health and long life!

Kindness and love are what everyone on our planet needs. It cures the most terrible diseases, saves in the wildest conditions, and, most importantly, fills our lives with meaning and happiness. Not a single good deed goes unnoticed, and each of them gives this world a new chance. Do good, help those in need, save lives and give love.