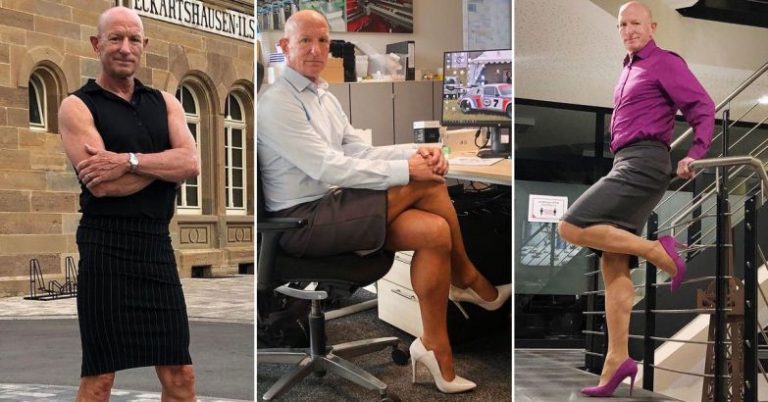 “My wife often helps me when choosing clothes. And my daughter would like to borrow my shoes from time to time.”

Clothing style is considered to be a universal marker of sex and gender. So, the vast majority of people classify skirts and high-heeled shoes exclusively as a women’s wardrobe, and business suits and ties as a men’s wardrobe.

Mark Bryan strongly disagrees with this. For many, it may seem strange that an ordinary man, who is happily married to a woman, boldly wears skirts and shoes. He explains his unusual addiction:  “Because I like it so much!”

Mark is American but currently lives in Germany where he works as a robotics engineer. On his Instagram, he writes that he is married, loves his Porsche, and admires beautiful women. The only thing that distinguishes him from other men is that he gives his preference to tight skirts and shoes.

“I look like this because I can. Just to be different. I have always been in awe of women in tight skirts and high heels,  ” recalls Mark. “  I’m not trying to look feminine or seductive. Personally, I believe that clothing has no gender. I just love skirts and heels. It is noteworthy that I prefer to dress “manly” on top and wear skirts and shoes below.

Variety of textures and shades.

Brian admits that it was the variegation of choice that inspired him for a fashionable experiment:  “There are so many different options in the women’s wardrobe! Speaking of men’s trousers, the color palette leaves much to be desired: black, grey, navy, and brown. No prints or bright accents. When choosing skirts, your boundaries expand a variety of shades, floral and animal prints. The same applies to shoes with heels. In addition, you can wear open-toed shoes, if, of course, the weather allows.

It doesn’t matter what I wear. What matters is how I feel.

“I don’t feel like someone else. It’s just clothes,  says Mark. – For natural reasons, in cold or windy weather, the physical sensations are completely different. Well, when I choose shoes with heels, I feel much taller. It is worth noting that due to the inappropriate appearance, one feels confidence and a surge of strength in the fight against stress at work.

By the way, Brian has been happily married for 11 years and receives incredible support from his family:  “My wife often helps me when choosing clothes. And my daughter would like to borrow my shoes from time to time.”

Mark also gave advice to men who like skirts and heels, but are afraid to appear in this form in public. “When it comes to shoes, then just start with low heels and work your way up to higher heels over time. Of course, some people behave like predators and rush at those they consider weaker than themselves. Therefore, show your confidence and do not be afraid of anything. Speaking of skirts, just put them on. Society will accept a man in a skirt much faster than a young man in heels, ”concluded Brian.