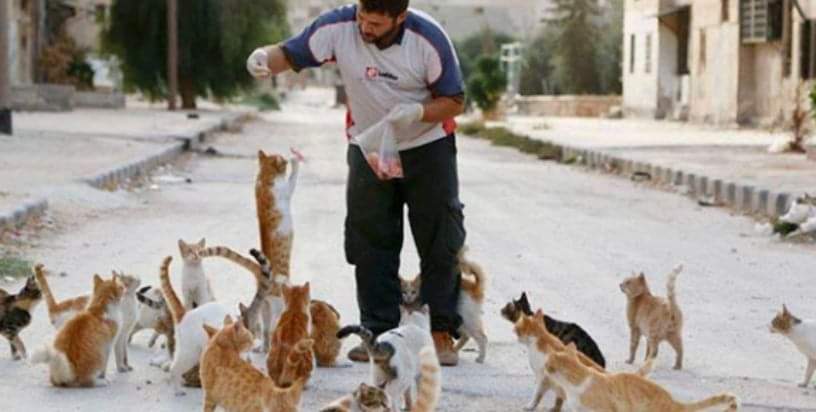 Without a question, you ought to get to know this excellent individual by the name of Mohammad Ala Aljaleli.

He is from Syria, and he is frequently referred to as the “Cat Man of Aleppo.” Aljalil has cared for more than a hundred stray and abandoned cats throughout the years, remaining with them “no matter what.” Many of you are aware that this city has long been regarded as a war zone, and that more than 45,000 residents have already fled for their lives.

Since the conflict began, Mohammad, an electrician by trade, has driven ambulances to assist those in need. Il Gattaro d’Aleppo, his own cat shelter, was established at that time. Twenty cats were there at first, but there are now more than 100 animals overall.

He came up with the idea to build a sanctuary for animals because many people were abandoning their houses during that time, leaving their pets without owners. Knowing about it beforehand, several individuals even brought their cats and left them with Aljalil.

A young girl recently went to see him drop off her cat at Aljalil’s shelter since they were leaving the country. Only when the girl began to sob and beg Aljalil to send the images of her pet did he reject her.

What a lovely individual… This individual is deserving of our sincere appreciation for his dedicated endeavor.