It’s no secret that care and love work wonders. As it turned out, this works not only with people and domestic animals but also with wild ones. The story of a little fox cub is an excellent confirmation of this. In just a month of care, he turned into a beautiful and strong fox.

The baby was found in the forest, he huddled in branches and grass. His body was weakened and dehydrated, the little fox could hardly stand on his feet and was afraid of everyone. Animal rights activists immediately took the fox with them, he did not have the strength to run away. They wrapped him in a blanket and he was able to warm himself there and feel a little better.

The fox was delivered to the animal protection and rescue center by volunteers. There, all of the conditions for his recovery were created. He was fed and watered, and the veterinarian examined him to ensure that everything was in order with the baby’s health. The foundling was given his own cage, where he was safe but could move around freely. 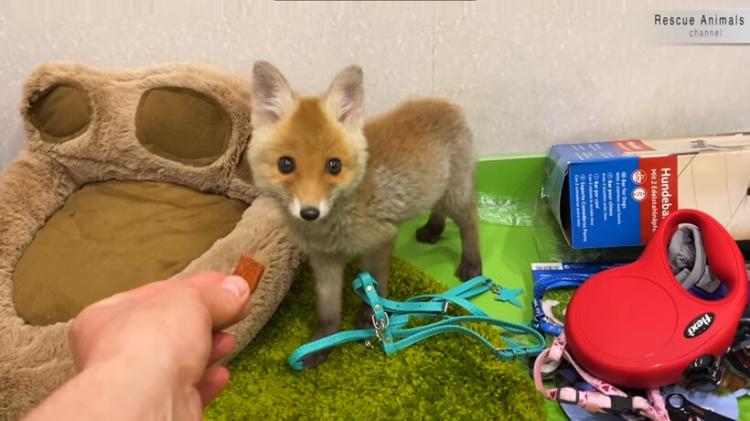 The fox began to change as a result of regular care and a nutritious diet. The gray shabby fur began to thicken and fluffy, and it now shimmered with red. The fox has grown up and now looks like a real young fox. Gradually he got used to the environment and began to socialize, he was no longer afraid of everyone and began to study the situation around him.

He was very happy with his first walk. He did not want to get acquainted with the kitten, but he continued to follow people without problems. He felt better after meeting the dog; they quickly found a common language, and he enjoyed playing and having fun with her. So, with love and care, the little shy animal grew stronger and more active. Nothing about him now resembles a helpless and emaciated fox cub.