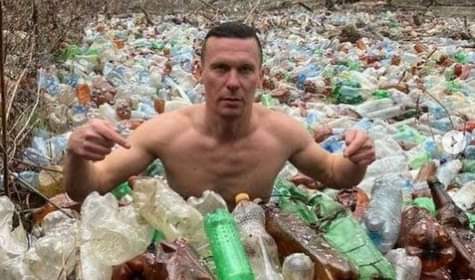 At baptism, Transcarpathian volunteer Viktor Buchinsky published a shocking picture. The man took a traditional bath in the mountain river Borzhava, dammed with household waste. Feiky.net knows what made the environmentalist take such a desperate step.

As it turned out, the photographs were taken near the village of Verkhniye Remety, Beregovsky district, a few days before the holiday. Victor’s goal was to draw public attention to the problem of waste disposal in Transcarpathia. According to him, it has reached alarming proportions. Borzhava is not the only river in the region dammed with waste.

Real garbage jams and traffic jams migrate through the territory of Ukraine and flow into rivers that carry their waters to other countries. So, the recent flood has already carried mountains of garbage to neighboring Hungary, the local authorities organized the cleaning of the Tisza and selected about a thousand cubic meters, mostly plastic waste, but some of it, due to the speed of the flow, followed further.

Due to severe pollution, the locals were unable to perform baptismal ablutions in their river this year. Despite regular raids to clean up the river by rescuers and caring citizens, the amount of waste continues to grow. It’s all the fault of the irresponsible and uncivilized attitude of local residents, who dump waste directly into the rivers, as well as rubbish heaps along the banks. Due to rising water levels in floods, all these heaps of waste also fall into the water.

The volunteer also turned to the authorities with a request to help resolve the garbage catastrophe and also warned that connivance from the outside could turn into an international scandal.