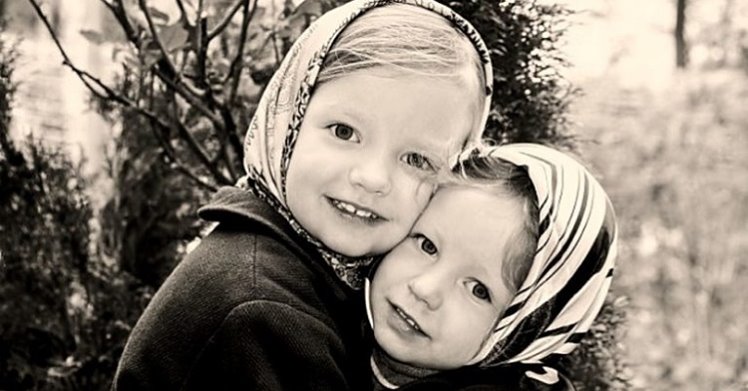 The story is about my sister. Although the story is twenty-five years old, I know that it will be relevant even now.

Mom was pregnant with me and my brother, we were supposed to be born after Christmas. But my mother was admitted to the hospital in advance so that she was under the supervision of doctors. She was alone in the ward and completely surrendered herself to dreams of the upcoming event.

But a couple of days later, just on Christmas Eve, a very difficult woman in labor was brought in. It was not clear whether she would live until the morning. But the woman turned out to be strong and in the morning went on the mend. She even got up and walked around the room.

Mom and Lyuba (that was the name of the neighbor) started talking. She said that she had lived all her life in the village and she was 42 years old. I really wanted children, because I was left alone early. Lyuba’s parents died at an early age, and she always felt lonely.

Lyuba did not say a word about the father of the unborn child. Mom did not ask, if the woman wanted to, she would have told.

Lyuba was beautiful and shone from within, despite the circumstances in which she fell.

She had a very beautiful and long braid, these are not worn now. And her face was covered with cheerful freckles, which gave her an image of lightness and simplicity. She was looking forward to the day when she could see the long-awaited child.

The women got on very well. Dad wore transfers to mom, and mom asked him to bring a little more. She shared apples, bananas, and oranges with Lyuba. Mom was still surprised that Lyuba tried bananas for the first time.

Not that she was from a Godforsaken village at all, no. After all, Lyuba shared with my mother several recipes for seaming for the winter and taught her to knit. Lyuba had needles and threads with her. Mom often remembers this woman with warmth in her soul.

The doctors who looked after Lyuba did not pay much attention to her. Other medical staff also treated the village woman in labor with disdain. And she needed a special approach because she entered into a very serious condition.

But apparently something went wrong in early January, Lyuba became very ill. She immediately goes to intensive care, and there the doctors fought for the life of the mother and child for several days.

One night my mother had a dream. Whether Lyuba said goodbye to her, and said that she was leaving forever for another country. But she cannot take her daughter, Angelina, with her. Therefore, she asked very much to take her and educate her.

Lyuba stared intently into my mother’s eyes, then hugged her and said: “Do not separate my Angelina and your children.” And she left.

Mom woke up with a feeling of anxiety. The nurse said that Luba passed away that night. She gave birth to a daughter.

Two days later, my brother and I were born. Mom could not leave Angelina in the hospital. She told my dad about the night vision. So Angelina appeared in our family. All relatives were sure that my mother had triplets.

And Lyuba more than once came to my mother in a dream. Advised and thanked. And once she saved my brother from death.

Michael was sick. Doctors put him on medication, but he got worse. The temperature rose. At night, Lyuba came into my mother’s dream and begged her to take my brother to the hospital. Without waiting for the morning, Michael was taken to the hospital.

Diagnosis – purulent sinusitis of the last stage. If the parents had hesitated even a little, the pus would have reached the brain.

We grew up as a close-knit family and didn’t know anything. Parents decided to tell the truth about the birth of my sister only after we became adults Mom told Angelina what a wonderful woman her mother was. Lyuba gave her life for the birth of her daughter.

Soon we will go to visit Angelina. She is married to a foreigner and lives abroad. And now we have our own Christmas story, which I want to share with you. For mom and dad, Angelina has become a real Christmas present. They often call her that.