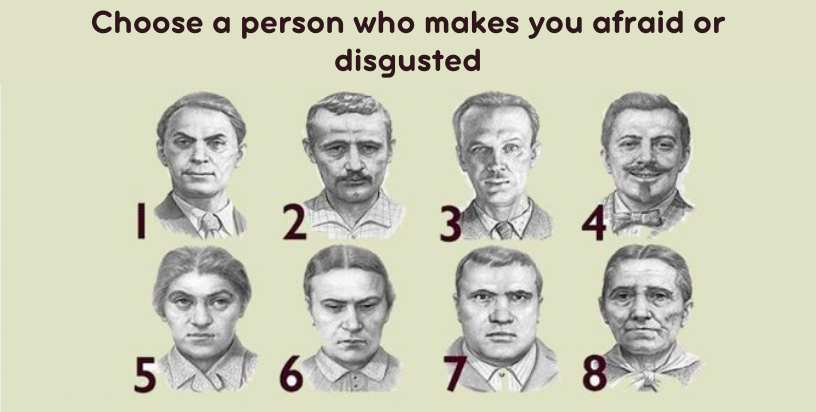 The Hungarian psychiatrist Leopold Szondi developed a unique test in the 20th century. It allows you to understand the deep impulses of human behavior and understand the character as fully as possible. This technique has repeatedly proved its accuracy and effectiveness.

The rules of operation are simple. Here is a picture with several faces. Look carefully at all the options and point to the person who causes you the most disgust or fear.

Here are some unusual examples. Have you chosen? Now it’s time to deal with the interpretation of all possible options.

1) A man with a haughty look

As a child, you often suppressed your desire to dominate. Now you are distinguished by a somewhat independent character and behavior.

You are not afraid of difficulties, but you do not do anything special to solve them. We are accustomed to looking at all problems as outside observers.

2) A man with a small mustache

Your character is extremely unusual. On the one hand, you are quite easy and simple to establish contact with other people. Find a common language with anyone in the blink of an eye.

People see you as a kindred spirit and a good listener. On the other hand, you often experience mood swings. Kindness can be replaced by an attack of aggression instantly.

3) A man with a high forehead

Such people are distrustful and rather conservative. They treat any changes with some aggression. They always try to control themselves, but sometimes they can lose self-control. Imagination is ideally developed, so often such persons lose all connection with reality.

Outwardly, such people seem very sociable and cheerful. But in the depths of their souls, they do not let anyone into their thoughts.

They try to move away and abstract from society. Individuals who have pointed to such an image understand that they don’t need anyone to be happy.

5) A woman looking from under her brows

The presented category of people is distinguished by an indomitable desire for communication. They are very charming and talkative. They often have a strong inner core based on moral principles and norms. They pay great attention to their appearance.

A unique symbiosis of activity and depression. Such persons are quite cheerful and very ambitious. However, they are often attacked by bouts of melancholy and apathy. With strangers, they behave somewhat closed and detached.

.Constant self-control and strict discipline. However, at some points in their lives, such individuals can quickly lose their temper and fall into a fit of unbridled fun, reaching hysteria.

Most likely, people who chose this face suffered from some problems with self-identification in childhood. Therefore, now they are trying to fully comply with their social roles. And they emphasize it all the time.