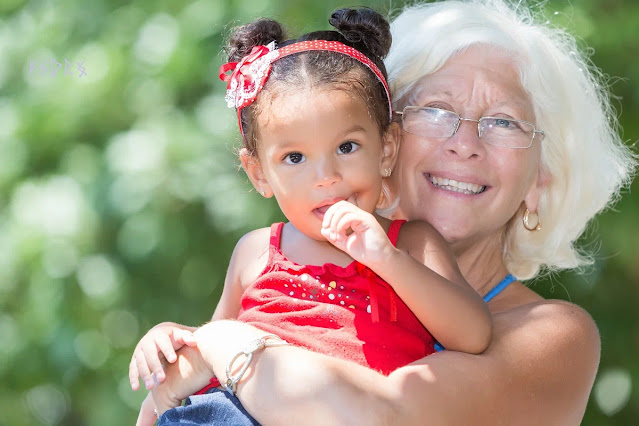 Grandma, can I help you? – the girl turned into an elderly woman well over eighty.

– Yes, here the legs do not bend in any way, to climb this seat, – the woman smiled.

The bus went to the end, there were few people and there were plenty of seats, choose anyone and everyone sat down separately. I suggested the seat next to me, it was lower, just right for the elderly or the disabled.

– I wanted to sit down next to my grandchildren, well, after three stops, everyone should get out anyway.

I looked closely at the woman. She had bright blue eyes, even despite her age, they were not cloudy. Her hair was probably gray and could not be seen under the cap, but her eyebrows were light. The girl, or rather a young woman, was dark-skinned, with almond-shaped brown eyes, and black bangs were visible. Her son, a toddler about 2 years old, wearing a funny hat with three pom-poms, had the same eye shape but was a little lighter.

I have seen this woman several times lately, as I drew attention to her coat, which was once very much appreciated in Russia. Well, such cloth with a pile, in my opinion, is Finnish. And a fox collar dyed to match the fabric. Probably everyone knows this style.

I noticed this woman because of her coat, and the coat was not worn, but always clean, the collar was not frayed. She lived in the next house.

So, after a couple of days, I went out to make a “promenade” between the houses. We have a great green space there. In winter, it is not quite green, but still, there is where to take a walk. When, after the first round, I passed by my entrance, I noticed how a woman in a green coat stopped near a neighbor at the entrance and they exchanged a couple of three phrases, after which she hurried on.

Well, I was disassembled by interest in this woman, I went up, said hello, and spoke to Lyudmila, that was the name of the neighbor. She asked who this woman was. And she willingly told me, however, to begin with, she invited me to visit for tea. And this is what my neighbor told me.

– Lydia Matveevna almost always worked at the top, – here Lyudmila pointedly pointed her fingers at the ceiling. Her husband died when Lydia Matveevna was 60 years old, just in time for her anniversary. Kolya had a late child, so his parents spoiled him. When his father died, Kolya had not yet graduated from the university. It’s good that there were savings, and Lidia Matveevna earned good money because she was still working.

It was only then that the first labor migrants began to appear in our country. How this girl appeared in Moscow and from which particular former republic, Lyudmila does not know. But the fact remains – Kolya began dating her. Well, he had few Muscovites, you see. In short, this girl became pregnant, and Kolya promised her that as soon as he received a diploma, he would immediately sign. Lidia Matveevna did not even want to hear about such a daughter-in-law. It’s a shame, a native Muscovite, and here the bride cannot even connect two words in Russian.

Only the young mother could not leave the child, she was discharged with him. A day later, she came and left the child on the threshold of the apartment. Let them themselves, they say, and give it to an orphanage. And she disappeared.

What Lydia Matveevna thought when she took the child to the apartment, no one will know. Only she did not give her granddaughter to an orphanage. She quit her job, nursed, and fed the girl herself. Maryana called her, at least the girl responded to this name.

The son at first began to drink and went on a spree, but then, as they say, something happened, he changed dramatically. Right within a month. He took up his mind, found a good job, married successfully, and now he has two children. The young wife of her son took over, and they moved to the other side of Moscow, to the North. Almost never did the neighbors see their son and daughter-in-law visiting Lydia Matveevna. Yes, and grandchildren too.

Mariana is always there. Only the neighbors hear – my grandmother this, my grandmother this. Matveev always walked with her on playgrounds, we have a lot of them. She dressed well but did not stand out. True, the children scoffed a little, but the grandmother did not tolerate it, she dealt with some parents personally. I found control.

Mariana studied averagely, then she graduated from college and immediately jumped out to get married. The guy, her husband, works as an engineer in some “Housing”, but in a different area, near the Varshavskaya metro station. They say he blows dust off his wife. And their grandmother is always their favorite. There are a lot of things left from those times, so Lydia Matveevna is fashionable, you can’t take it with you … And what her grandchildren love, I myself heard on the bus. Even envied. This is the story my neighbor told me. How is your relationship with your children and grandchildren?