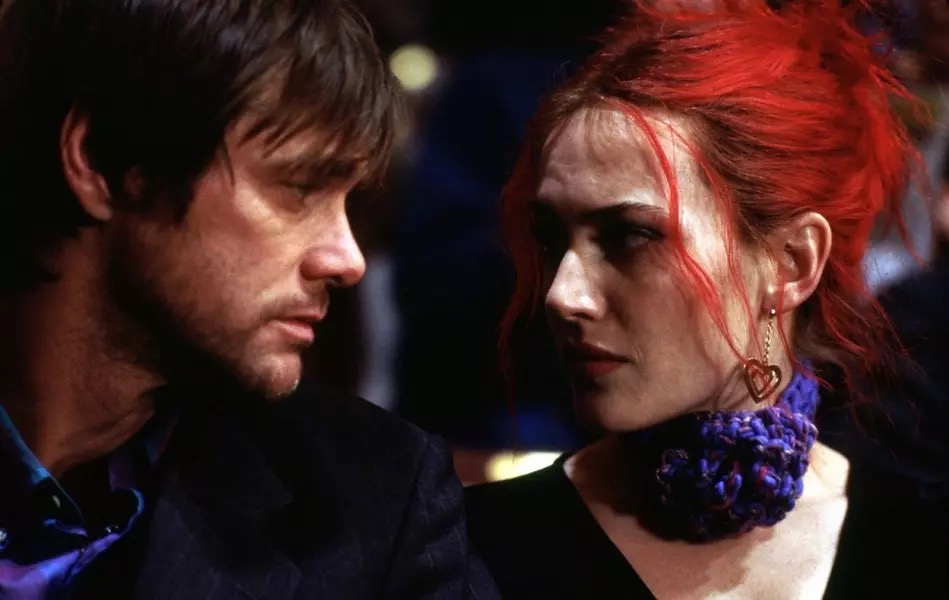 On January 17, 2022, the Hollywood comedy star turned 60 years old. In the vast majority of his films, Carrey appears as an extravagant joker, a merry fellow with inimitable facial expressions. But the life of an actor who makes the whole world laugh is more like a drama. We recall the most interesting and rare facts about the actor.

Jim Carrey was born in 1962 in Canada in a large family: in addition to him, Kathleen and Percy had older children Pat and Rita, and John. The mother, suffering from a mental disorder, was a housewife. She often attributed to herself non-existent illnesses and constantly talked about death in the presence of her children. These strange reasonings of hers so etched themselves into the mind of little Jim that for a long time he was shaking at the word “death” like an aspen leaf.

Many years later, in an interview, he stated that children should be treated like adults. These are the same individuals with fears, hobbies, and desires, only of smaller stature.

The father of the future star worked as an accountant, but all his life he dreamed of an acting career, which remained just a dream. And the discrepancies between desires and opportunities made Percy Kerry a joyless person.

The family did not live well, often there was not enough money to pay bills. Then parents with children moved to a new place for a while, then moved again and again. When Jim was 14 years old, due to lack of money, everyone practically became homeless – they lived in a small decrepit van. 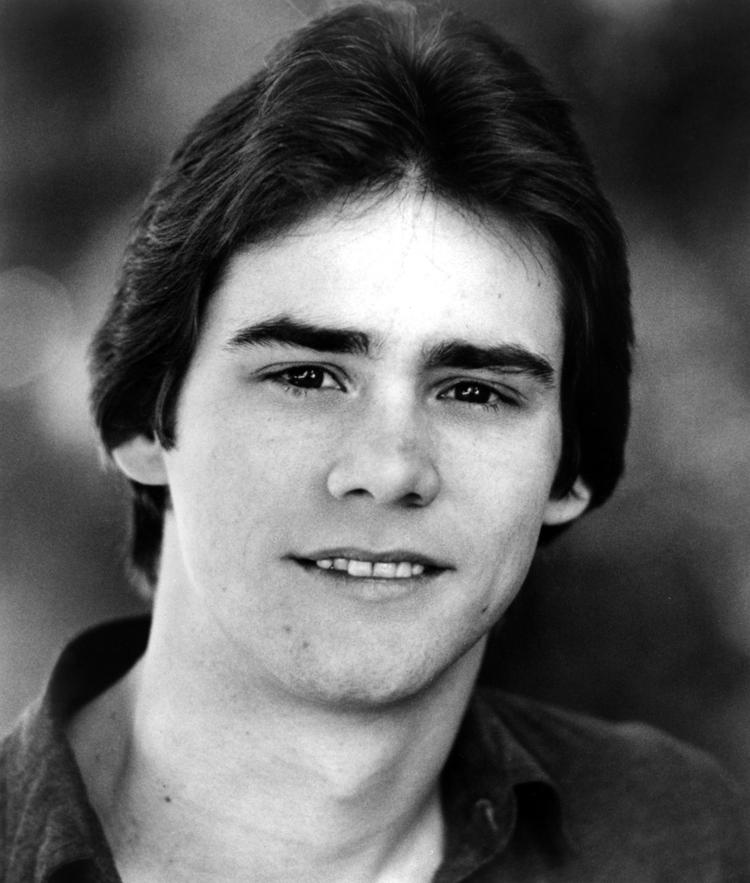 As a schoolboy, Kerry worked as a janitor at a factory where his father found work. Jim and his brother and sisters washed the floors, and scrubbed the toilets. Of course, such activities did not have the best effect on the mood and self-esteem of adolescents.

For more than a decade, the whole world has been laughing at the comedies of Jim Carrey. But he himself grew up as a sad, lonely, and withdrawn child. According to him, as a child, he spent most of his time in his room, where he talked to himself in front of a mirror. Little Jim had a lot of time to learn how to build funny faces, which later became his calling card.

Jim knew he had talent, but few saw it. And the beginning of his career was not easy. During his high school years, he submitted about a hundred videos of parodies of a popular TV show, but all of them were rejected. When he first performed at the club where his father brought him, the 15-year-old boy was booed. After such a failure, he did not dare to go on stage for two years.

But in 1979, the self-taught actor decided to appear before the public again. And this time he succeeded. Two years later, he was already the main star of the club in Toronto, and the local press called him promising and talented.

In the early 1980s, Kerry moved to Los Angeles (by the way, until 2004, Jim did not have US citizenship). Here he tried to break into the popular TV show Saturday Nigth Life and Joel Schumacher’s film “Capital Taxi Drivers”, but he failed.

The fame of “the best parodist in the world” quickly spread in the right circles. In 1984, People magazine wrote about him, and soon Kerry got his first major role on TV – in the children’s animated series The Duck Factory (before that, he managed to flash in a couple of episodes).

The actor began to earn the first money and moved his parents to him. It seemed that life began to improve, but a year later the show was closed. Finances ran out, and mother and father went back home. Jim fell into a depression and stopped touring for two years and completely disappeared from public view. 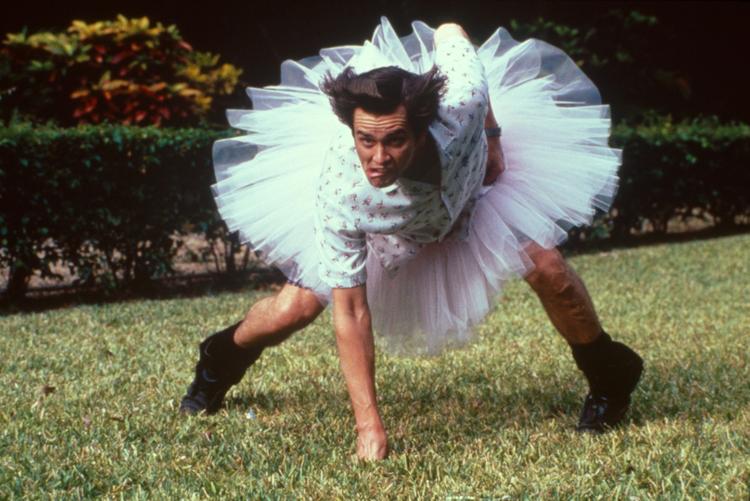 Career gradually began to move dead center in 1985, when the actor (not without the help of friends) got the lead role in the film Once Bitten. Then invitations to audition began to pour in one by one, and for several years Jim Carrey played in the films Peggy Sue Got Married, The Game of Death, Earth Girls Are Easy, Pink Cadillac, and others.

In 1993, the premiere of the film “Ace Ventura: Pet Detective” took place, which became the hallmark of the artist. For this work, Kerry received 350 thousand dollars. By the way, the actor wrote himself a check for $ 10 million, which he promised to cash out in a few years. So he made a promise to the universe, making a brilliant career for himself.

And the reality turned out to be cooler than the artist’s wildest dreams. A year later, for his role in the comedy “Dumb, Dumber” he received $ 7 million, and a year later the legendary “Mask” was released on the screens (here Cameron Diaz became his partner ), however, the fee for this film was not so impressive. 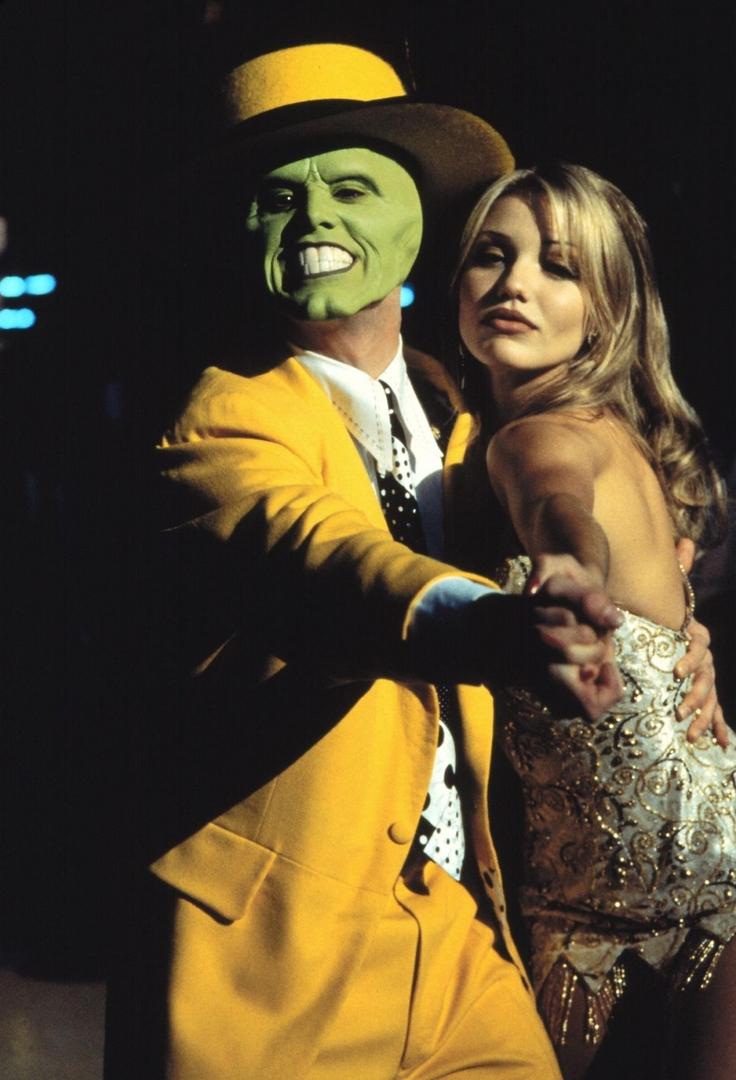 For the films The Cable Guy and Liar Liar, Carrey earned $ 20 million each, which was a record for an artist in the comedy genre.

There are several roles in the actor’s career in which he appears in an unusual role for himself. In the 1998 drama The Truman Show, Carrey played a character who turned out to be the protagonist of a huge TV show. For the role of Truman, he received the Golden Globe, the MTV channel award as the best actor of the year.

In 2004, viewers saw “Eternal Sunshine of the Spotless Mind”, where Kerry became Kerry’s partner. Here, Carrey is reincarnated as the shy and melancholy Joel, whose life changes after meeting the flamboyant Clementine.

Then he played in “Lemony Snicket: 33 misfortunes”, “Always say yes” and other famous films. 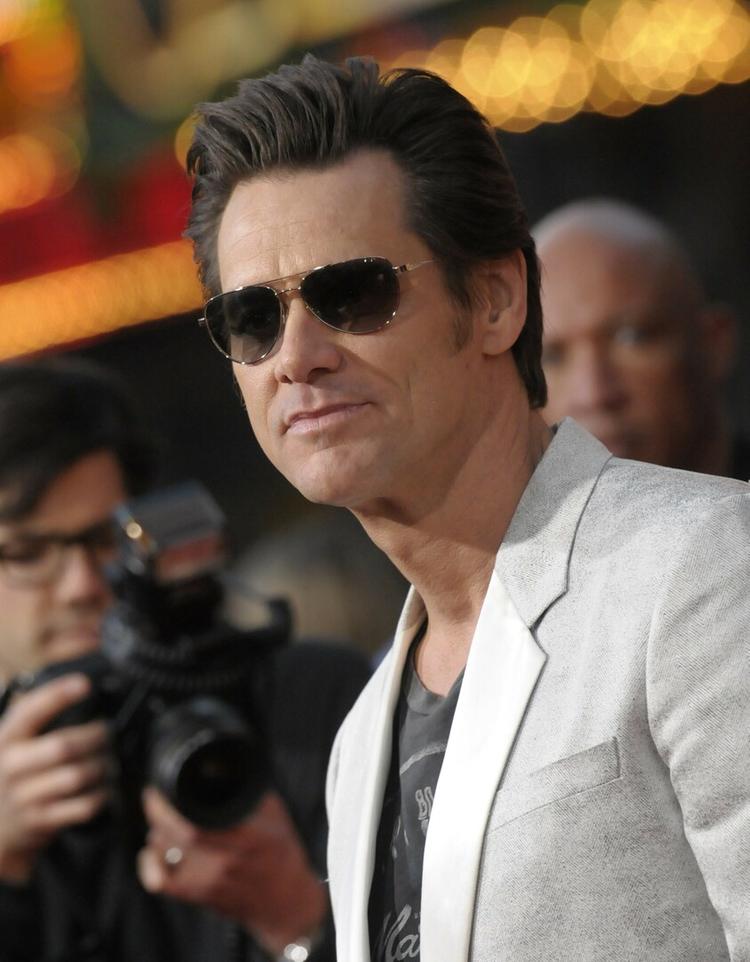 In 2005, Carrey was in the top five most annoying actors. The survey was conducted by Empire.

Jim Carrey has always been surrounded and loved by beautiful women. The actor had many novels and two marriages. On March 8, 1987, he married waitress Melissa Womer, and on September 6 of the same year, they had a daughter, Jane. In marriage, the actor sometimes behaved strangely, as a result, the family broke up in 1995, and the ex-wife received $ 7 million.

After the collapse of the family, Kerry again drowned in depression, which he tried unsuccessfully to fight with medication. Realizing that the pills did not help, the actor found the strength to act in other ways – he went in for sports and began to drink vitamins.

Carrey’s second wife was his co-star in the film “Dumb, Dumber” Lauren Holly, but their union broke up 10 months after the wedding. 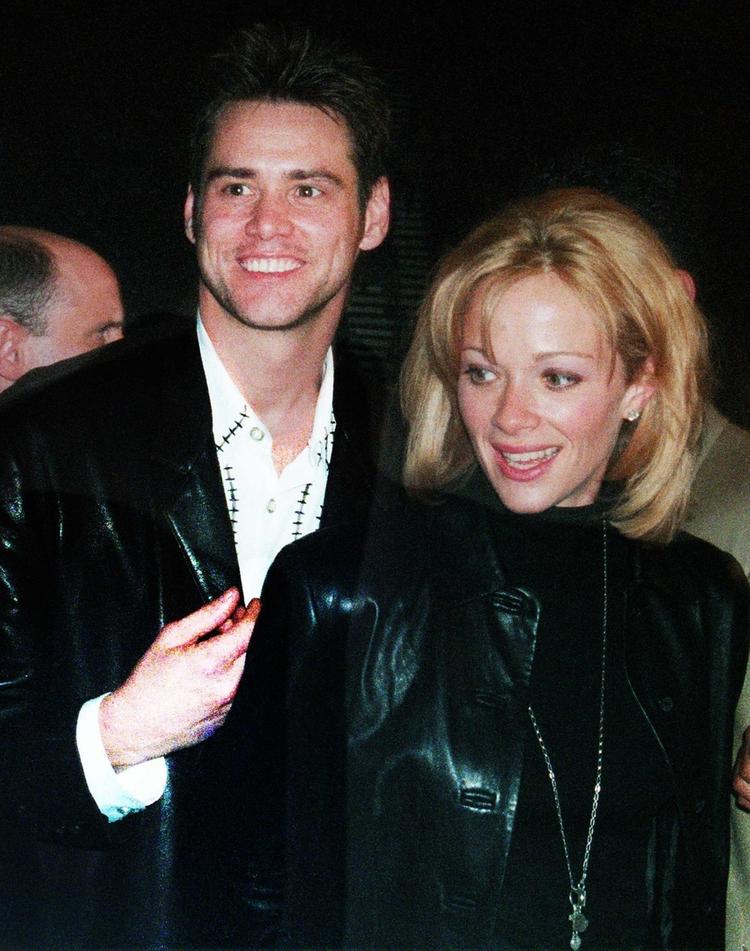 Jim Carrey was in a relationship with Renée Zellweger, Playboy model Anine Bing, with his personal physician, Tiffany Silver.

An important role in the life of the actor was played by fashion model Jenny McCarthy, with whom he had an affair in 2005-2010. Kerry said that she was the only woman he never doubted. But this relationship also failed due to Jim’s strange behavior. After the breakup, he is rumored to have paid Jenny $ 25 million for silence, but the actor denied this fact.

In 2012, Kerry began an affair with makeup artist Catriona White, who was 25 years his junior. This novel became the loudest and most tragic in the biography of the actor. He then parted with his beloved, then they reunited again. At the time of one of the breaks, White managed to get married. But after another breakup in 2015, Catriona committed suicide. This was a big blow to Jim. At the funeral, he was among the pallbearers, the actor looked crushed by tragedy.

A year later, Catriona’s husband and mother accused Jim Carrey of being indirectly involved in the girl’s death. The actor was blamed for inappropriate behavior and the fact that he infected his beloved with a bunch of intimate diseases. The actor filed a counterclaim, trying to protect his honor, but two years later the claims were withdrawn from both sides.

At the 2019 Golden Globes, Jim Carrey appeared in public with a new lover, actress Ginger Gonzaga (she is 23 years younger), whom he met on the set of the TV series I’m Dying with Laughter. 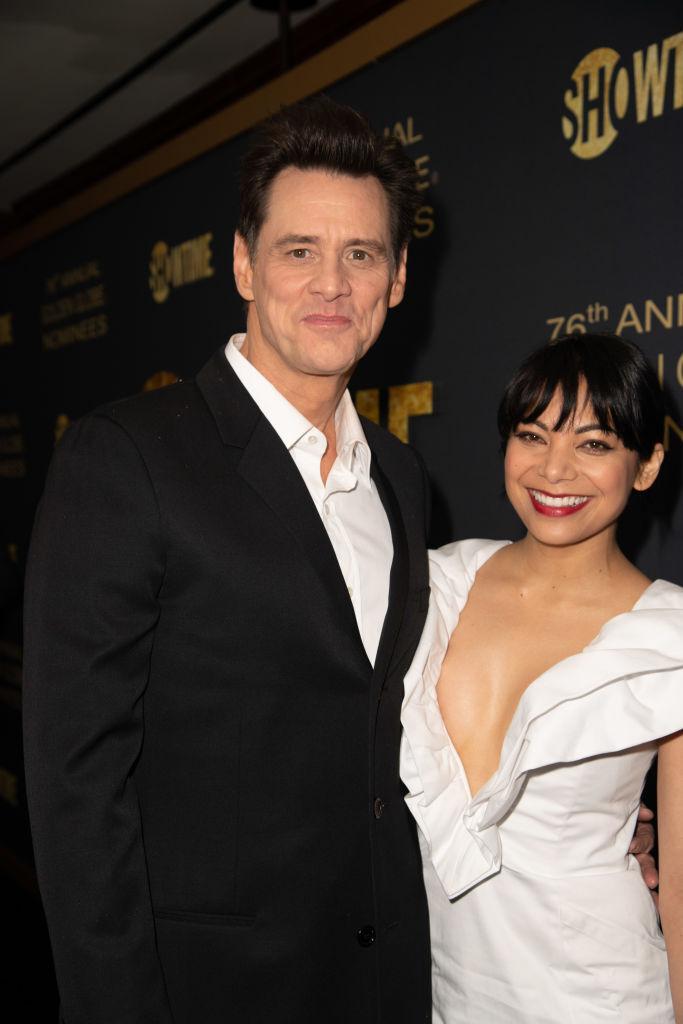