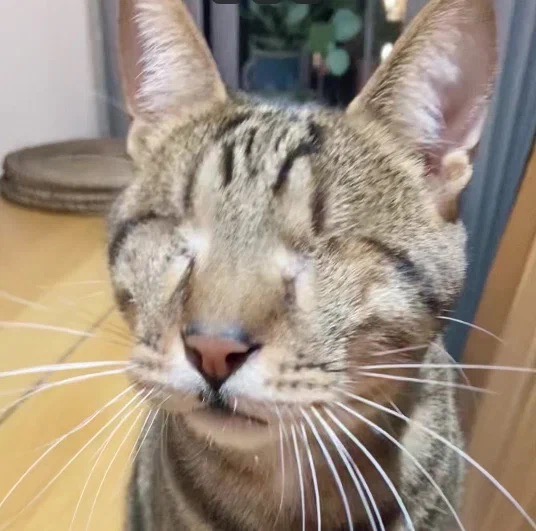 From the photographs, it immediately becomes clear that the cat, named Dimitri, is blind. This feature influenced his habits, making the behavior somewhat unusual for a cat.

The full name of the cat is Dimitri, it is Greek because the animal comes from this country. Dimitri lived on the street until a kind woman took him in. By the time of the fateful meeting, the cat was seriously ill, but the veterinarians were most concerned about an eye infection. Analyzes confirmed their correctness and the animal’s eyes were removed. So Dimitri lost the ability to see.

Emma Pelkievich, who picked up the animal from the street, did not frighten Dimitri’s blindness, she decided at all costs to cure him and take him home.

After the operation and taking medication, Dimitri’s health became much better, and for Emma, ​​the most difficult stage began – the paperwork to transport the cat across the border. Emma lives in London and is a British citizen. Greek officials are not much different from ours: no one needed a cat in their native country, but this does not mean that they will easily let him go to another. It took a huge package of documents to cross the two borders, but Emma was able to overcome the system and collect all the certificates.

Now Dimitri lives with his owner in London. The cat adapted to the new house surprisingly easily, having studied every room and all the objects in them. The cat easily finds the way, jumps from object to object, plays and runs. The absence of eyes does not prevent him from leading a full and fun life as a pet.