The dog even broke the famed Hachiko’s record!

A monument dedicated to a peculiar dog named Naida, who has become a true legend, has been constructed in the city of Komsomolsk-on-Amur.

The dog’s owner was sadly killed in a vehicle accident, and the dog remained in this location and waited for him for twelve years. Compassionate residents of Komsomolsk-on-Amur fed the dog and even built a booth. In honor of Naida, a monument was erected, funds for which were collected not only by local residents but also by people from many other Russian cities.

Once, in 2005, Naida was hit by a car at a pedestrian crossing near the park. The driver of the car ran into a passer-by man, who died right on the spot. The dog survived but injured its paw. After this incident, some said that the animal had disappeared somewhere, while others claimed that Naida was being treated at the clinic.

Later, the dog returned to the Lenin Avenue bus stop and met and accompanied the buses once more. The townsfolk recognized that Naida was expecting the owner and did not drive her away. This carried on for a long time. The dog has become a living symbol of the city.

Nobody knew who owned Naida, but everyone loved her dedication. The animal was periodically fed and two booths were built for it.

There were attempts to attach Naida to new owners, but each time she ran away from home and returned to the same place. The dog was afraid of strangers and only accepted food from those he knew well. Some media wrote that a woman named Tatyana Gromova was courting Naida.

In the park, which was located next to that very stop, the dog spent twelve years. During the period of ennobling the square, the dog was taken to a kennel for a while, where he was constantly sad and did not eat anything. At the request of the activists, Naida was returned to her permanent “post”.

Phenomenally devoted to the owner, the dog broke the record of the famous Hachiko, who spent ten years waiting for his owner.

Unfortunately for everyone, in 2016 the dog was again hit by a car and brought to the Zoospas clinic, where he died a week later. All this time, Tatyana Gromova was next to Naida. 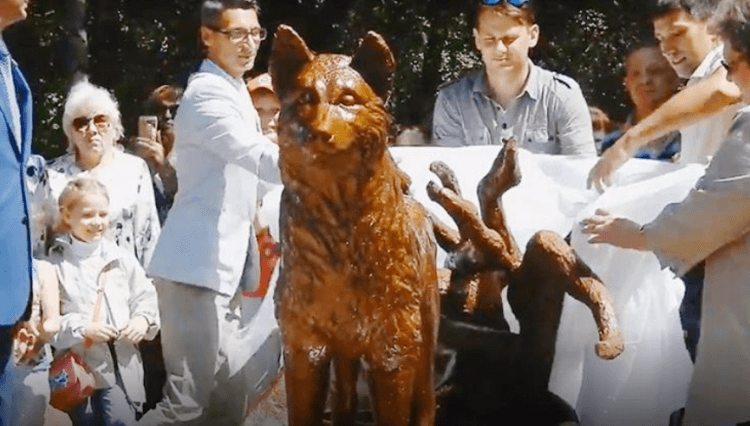 Following that, Komsomolsk-on-Amur inhabitants, together with citizens from neighboring places, gathered funds to create a memorial in honor of the loyal and faithful Naida.

The activists made a short film about an unusual animal.