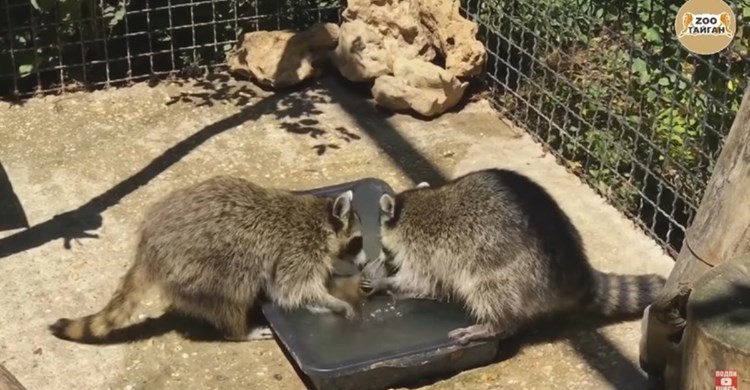 You can compare the raccoon with the mothers of small children who fuss because of the fear of forgetting something.

Crimean safari park “Taigan” is known for the fact that it contains the most formidable African predators – lions. The prides that have formed in the park include about 60 lions of different sex and age.

They appeared after a long and painstaking work of collecting animals from different zoos, and parks in Russia, Ukraine, and other European countries. Now the lions live on a huge plot of 30 hectares. This is enough for them to move freely, to hunt.

Yes, surprisingly, but a person has almost no effect on the life of animals. Visitors to the park move on special high bridges. This gives the lions the opportunity to lead a life on their own schedule.

However, in addition to the safari stars, the park also contains other animals, the life of which he often talks about on his social networks. For example, recently a funny video appeared on the Taigan website about how a female raccoon bathes her babies.

Raccoons in the park live in a fenced area, in special houses. The house of this female is quite high, so she climbed up and down several times with her kids. And then brought them back.

Repeatedly the female just ran back and forth. Her behavior amused users. Many compared the raccoon to mothers of small children who fuss out of fear of forgetting something. Such comical situations often occur in the park. That is why all lovers of wildlife like it.