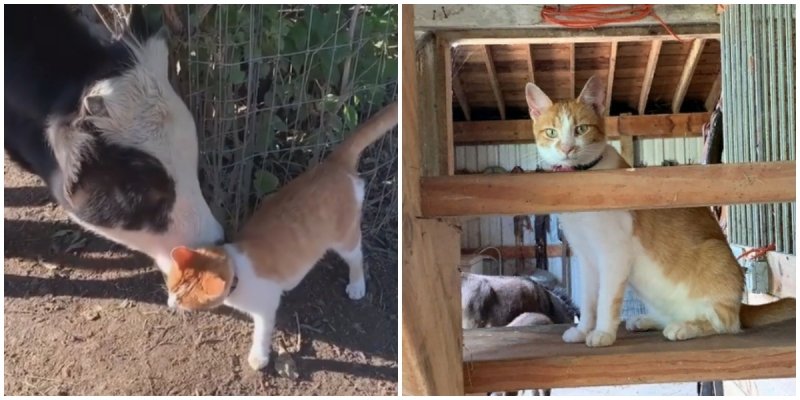 Hershey the cow and Rhys the cat from Indiana (USA) met more than a year ago and have been inseparable ever since. The incredible tender friendship of a cat and a cow is shown by the owner of the pets on Instagram.

The friendship between animals is not uncommon. However, most often pets of the same species are friends with each other. These funny and cute pets have moved the entire Internet! The owner of the pets told on Instagram how such dissimilar animals met and became friends.

“They spend all the time together. When I brought Hershey home, she was tiny and very shy to communicate with other animals. Then Rhys approached her and instantly established contact with her: he seemed to help her get out of her shell,” Sandy said about meeting two friends.

There are many other cats on Sandy’s farm, but Hershey chose Rhys. None of the animals on the farm have that connection anymore.

“Hershey always licks Rhys when he sees him, and Rhys sometimes just sits and looks at his girlfriend when she eats, because he is interested in watching what she is doing. And sometimes they lie down together in the barn and sleep,” said Sandy Powell.

On Instagram, for almost a year now, a woman has been sharing a touching life from a farm, the stars of which are a cat and a cow.